What is a myringoplasty?

Myringoplasty is a surgery to repair a large hole (perforation) in your eardrum that has not healed itself within a few weeks. A perforated eardrum can be caused by trauma or an infection in your middle ear that bursts through your eardrum, and can lead to repeated ear infections and poorer hearing.

This operation is usually done under general anaesthetic or sometimes local anaesthetic and takes between an hour and an hour and a half. It involves using a piece of tissue, called a graft, to cover the hole. It may be carried out down your ear canal or through a small cut in front of or behind your ear. Your surgeon will usually lift your eardrum, place the graft underneath, support it with a dissolving sponge and replace your eardrum. 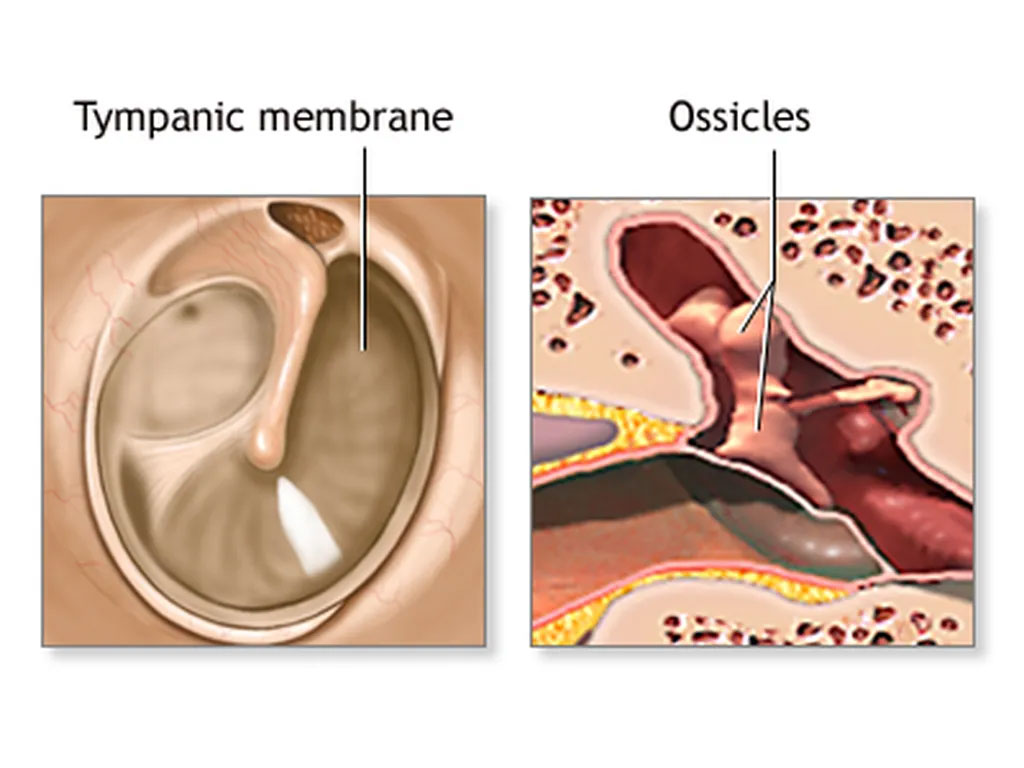 What is a Tympanoplasty (Repair of Tympanic Membrane) & Ear Ossicles?

Tympanoplasty is a surgical technique to repair a defect in the tympanic membrane with the placement of a graft, either medial or lateral to the tympanic membrane annulus. The goal of this surgical procedure is not only to close the perforation but also to improve hearing. The success of the operation depends on the ability to eradicate disease from the middle ear (eg, inflamed granulation tissue and cholesteatoma). Various techniques have been developed and refined, and a number of grafting materials are available. Both the lateral and medial grafting techniques are detailed below.

Tympanoplasty is a safe and effective outpatient procedure used to both eradicate disease from the middle ear and restore hearing and middle ear function. [1, 2] A number of surgical approaches and grafting techniques are available for use by the surgeon

What is a Mastoidectomy (Removal of Cholesteatoma)?

A mastoidectomy is a surgical procedure that removes diseased mastoid air cells. The mastoid is the part of your skull located behind your ear. It’s filled with air cells made of bone and looks like a honey comb. The diseased cells are often the result of an ear infection that has spread into your skull. The procedure can also be used to remove an abnormal growth of the ear known as a cholesteatoma.

What is a Facial NV Surgery (D-compression)?

Pressure and compression of any cause on a peripheral nerve can cause nerve impulse block. That is, the nerve is no longer able to send electrochemical impulses, and hence does not send signals to the brain or from the brain to muscles. There may also be demyelination (loss of the nerve's myelin sheath) and degeneration of the nerve in the affected area but it does not effect axons beyond this site.

The facial nerve is a mixed nerve (i.e. containing both sensory and motor nerve fibres) and therefore compression can create sensory (e.g. anesthesia - numbness, or paresthesia - tingling) and motor deficits. Early surgical intervention tends to be carried out because after three to four months, fibrosis (replacement with fibrous tissue) occurs in a significant portion of nerve fibers, and after that decompression is not of much value. 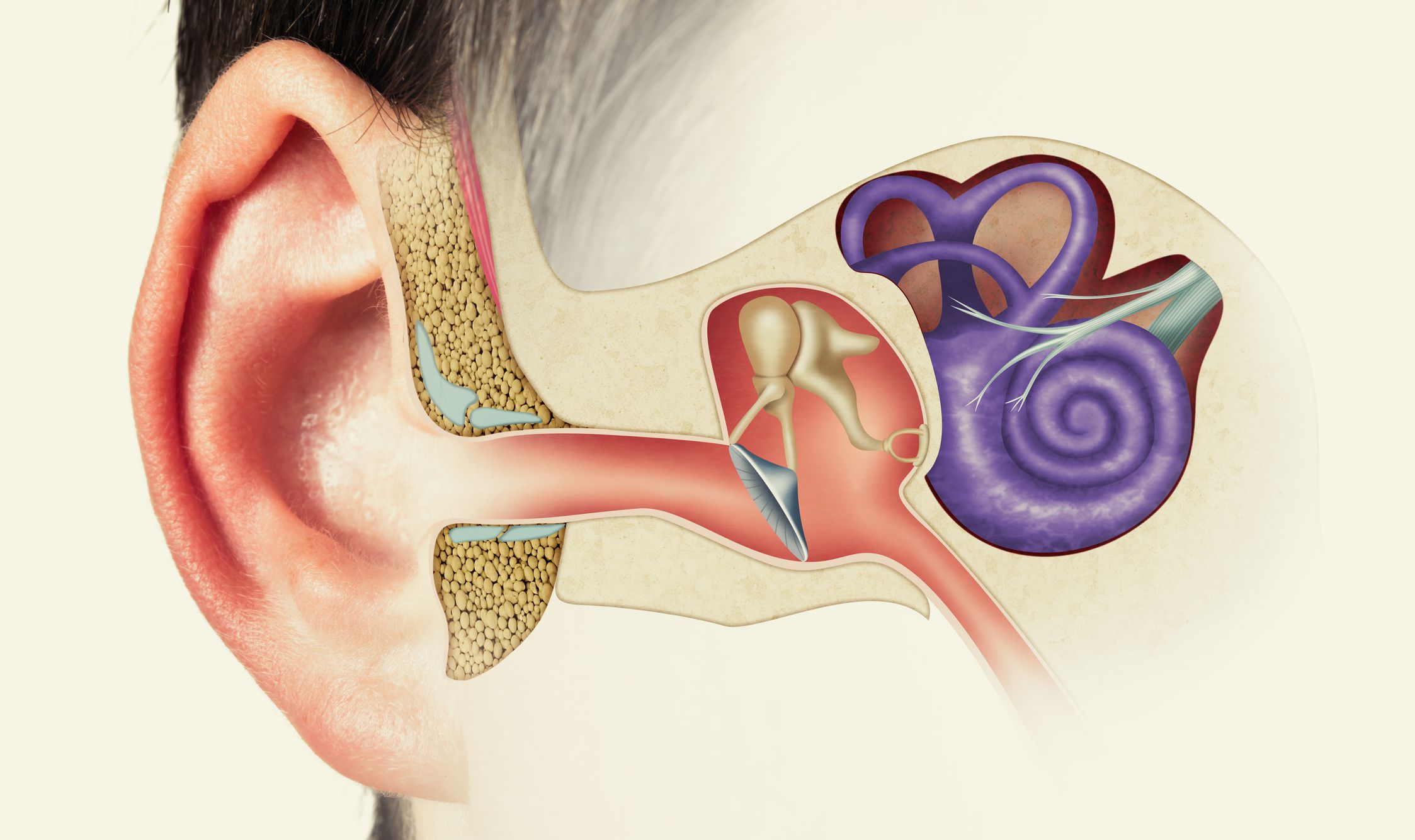 What is a Stapedectomy / Statedotomy?

What happens during the operation?

The operation is performed by operating down the ear canal although in about 5% cases the ear canal is too narrow, and a small incision is made in front of the ear to facilitate the surgery. The ear drum is lifted and the stirrup part of the stapes bone is removed using either a purpose designed micro drill or a laser. A hole is then drilled or lasered through the baseplate of the stapes for the artificial piston to sit in. Before the piston is put in the hole a small segment of vein (taken from the back of the hand) is placed over the hole to stop inner ear fluid from escaping. The piston is then placed over the vein graft and into the hole. Although the vein technique is technically more demanding your consultant believes it gives a safer long-term result. Surgery is normally performed under general anaesthetic (you are asleep)

What can I expect after surgery? 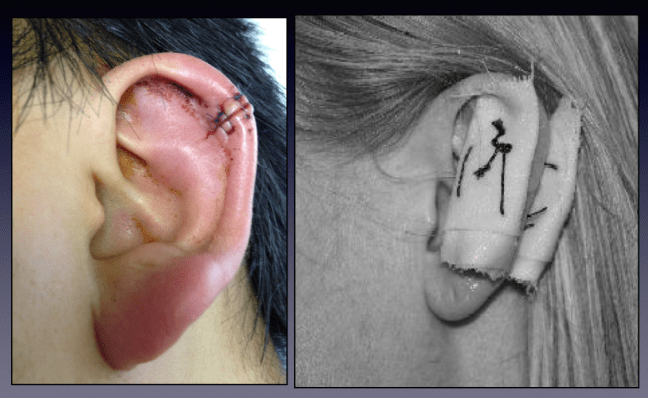 What is Ear Laceration (Trauma Surgery)

Ear trauma is common and frequently co-exists alongside other traumatic injuries. All patients with head injuries or trauma should be approached in a structured A to E format.

Injuries that initially appear simple can be complex and could require involvement from multiple inpatient team specialities. Fortunately, most ear trauma does not require urgent management (and the management of any intracranial pathologies will nearly always take priority). 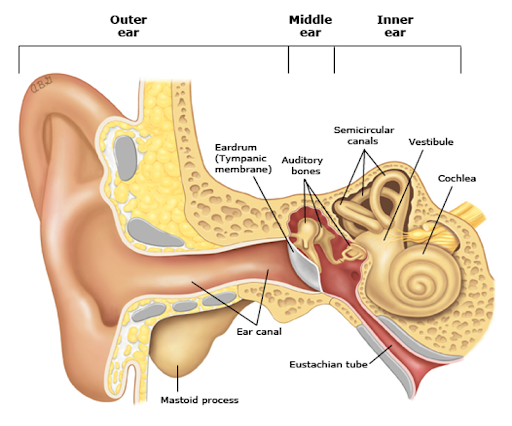 The removal of foreign bodies from the ear is a common procedure in the emergency department. Children older than 9 months often present with foreign bodies in the ear; at this age, the pincer grasp is fully developed, which enables children to maneuver tiny objects.